The UK’s World Heritage Sites and monuments are celebrated on World Heritage Day each year on the 18th of April. Established by the International Council on Monuments and Sites, the focus is on the diversity of the cultural heritage of humanity. Plus the site’s vulnerability and the efforts required for their protection and conservation.
Yet, how can we celebrate them? Now the weather is warming up, we can give a UK world heritage site a visit in the sunshine.  Here are some of our favourite World Heritage Sites and monuments across the UK…

Some different kinds of Heritage Sites in the UK include: 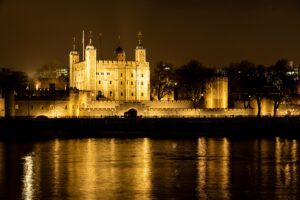 How many World Heritage Sites are there in the UK?

As stated by the National Trust ‘A World Heritage Site is a cultural or natural landmark that has been recognized by the United Nations Educational, Scientific and Cultural Organization (UNESCO)‘.

World Heritage Sites are also universally important because they belong ‘to all the peoples of the world, irrespective of the territory on which they are located’. Therefore, there are many for everyone to admire!

To find all the UNESCO World Heritage Sites across the world look up the UNESCO interactive map.

The city of Bath is one of the oldest UNESCO World Heritage Sites in the UK. Here, you can explore Roman ruins and 18th-century architectural features throughout the city.

Favourite World Heritage Sites in the UK for Free Spirits

Bath was added to the World Heritage Site List in 1987 and is known as a ‘cultural site’. It was given this title because it holds many cultural and historic attributes within a beautiful, landscape setting. Also, it’s a top location for a city break where you can admire many ancient things.

What can you see and experience in Bath? 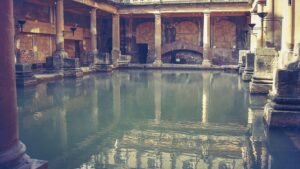 Not far from Bath is Salisbury Plain in Wiltshire, where you can find Stonehenge…

Probably the most famous prehistoric, megalithic monument and sophisticated stone circle in the world, Stonehenge’s origins are still shrouded in mystery. A structure older than the pyramids in Giza, it became one of the many UNESCO World Heritage Sites in 1986.

Along with Avebury (the largest stone circle in the world) in the North Wessex Downs, they symbolise a unique embodiment of our collective heritage. The monuments also demonstrate the outstanding creative and technological achievements of prehistoric times. Collectively, these sites will inspire anyone with an interest in the distant origins of our collective civilisation.

The best way to enjoy a visit to Stonehenge

Give yourself 2.5 hours to see Stonehenge and take a picnic lunch. Walk around Stonehenge’s circle or go inside the stones, via an audio-visual 360 degrees stone circle experience. Stroll around the museum to learn about the 4,500-year-old monument. Or walk around the sites of Neolithic Houses nearby and imagine how the people of Stonehenge lived.

For more picnics immersed in UK Heritage, head to the Lake District…

The Lake District is one of our more recent World Heritage Sites, given the title on 9th July 2017. It became a World Heritage Site because, over the last 1000 years, it has continued to follow a unique and traditional farming system of sheep and beef rearing.

The area also helped industrial towns grow and flourish by using natural resources, such as mines, to extract copper, lead, and iron. These traditional industries and systems have enhanced the area’s unique character. The character of the Lake District, with distinctive stone-walled fields and farm buildings, have continued to survive.

Things to do in in the Lake District:

Northern Ireland’s 8th wonder of the world has been a World Heritage Site since 1986 and is of global geological importance. What makes it unique is its 40,000 large, regularly shaped polygonal columns of basalt, which stand in perfect horizontal sections. The site’s location is the perfect place to study basaltic volcanism. However, there are other giant experiences to have at The Giant’s Causeway…

Tours at The Giant’s Causeway

The Giant’s Causeway also features in our favourite self-driving holidays blog, alongside the Outer Hebrides, which are not far from St Kilda in Scotland…

St Kilda is a tiny, isolated archipelago made up of five islands (Hirta, Soay, Boreray, Dun, and Levenish). Together, they sit west-northwest of North Uist, within the North Atlantic Ocean. The archipelago has held this status since 1986 because it is a significant natural beauty spot and home to a large variety of birds.

In 2005, it was recognised for having an important cultural landscape too, due to the structures, field systems, cleits, and traditional stone houses that have stood there throughout 5,000 years of human occupation – in extreme conditions.

The best way to visit St Kilda is by boat from the Isle Of Harris in the Outer Hebrides or via the Isle of Skye.

What can you do on St Kilda? 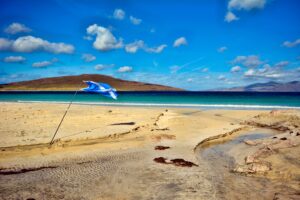 Once you have chosen which UK Heritage Site to visit, find a historical place to stay nearby. Or simply stay in a historic building for a long weekend break!

Historic Accommodation in the UK

Find yourself an ancient castle, complete with a five-star restaurant and private spa bathroom. After breakfast, wander around grand gardens and discover scenic spots among the hedgerows and flowers.

For a luxurious holiday, stay in a unique setting. For example, try an opulent oast house (a building designed for drying hops), with a swimming pool. To take in the sea air, book a beachside retreat with your own private beach.

Heritage country hotels and sleepy manor houses can be found in cities and the depths of the UK’s countryside. Find one with a golf course for a golfing holiday or within a 400-acre estate, to explore at your leisure.

Whichever hall, house, or hotel you choose, remember that when you take out Free Spirit UK Travel Insurance, you will be covered for End Supplier Failure with a Super Duper Policy. This is an invaluable benefit to have if your accommodation provider suffers from financial failure before or after your departure. To find all the key features and benefits of each level of cover click here.

Wherever you stay and whatever World Heritage Sites you visit, don’t forget to take Free Spirit UK Travel Insurance as well. We’ll be happy to help you travel with confidence.