Are you curious about Japan? Wish to experience its bustling cities, soak up Japanese culture and learn more of its rich history? Like traditional Ryokans that nestle between modern skyscrapers, Japan has a whole spectrum of culture to enjoy. Plenty to fill any traveller’s bucket list.

With many things to do, delicious food options and a welcoming atmosphere, there is no surprise that this country is quickly becoming one of the most popular destinations in Asia.

Great news then that a holiday in Japan is now something we can plan again, since the country reopened to tourists. Indeed, we can think about  Japanese destinations to explore without applying for a visa first. Moreover, even if you’re not vaccinated for coronavirus, as long as you hold a negative COVID-19 test 72 hours before departure you will be able to enter.

To secure fast-track entry, register all the requested documents and data before leaving home on Visit Japan Web. This data will include Coronavirus information, an embarkation form, and a customs declaration. Then you’ll need to declare any medicines at the airport.

Travelling with medicines to Japan?

If you need to take prescription drugs, the ones below will need to be considered carefully.

Hallucinogenic, narcotic, or psychotropic drugs are not allowed in Japan unless there are very special circumstances. In this case, approval is needed from the Japanese Government (the directors of the Regional Bureaus of Health and Welfare). So, you’ll need to send written confirmation from your GP, to state why you’re being prescribed this medication.

For all other prescribed medication (excluding injections), you can take up to one month’s supply – without written consent. However, if you don’t need a bigger supply (or administer your medication via injection), you’ll need to apply for a Yakkan Shoumei. This is like an import certificate. Above all, double-check with your GP before leaving home.

Organise your currency for a holiday in Japan

Currently, the exchange rate between the British Pound (GBP) and the Japanese Yen (JPY) is good. At the time of writing, 1 British Pound would buy you 168.57 Japanese Yen. Each yen is then divided into 100 Sen.

To ensure you get the best exchange rate when planning a holiday in Japan you could consider ordering a Japanese travel debit Card. This is a debit card that will stop you from paying hidden exchange fees in the exchange rate. It can be used to pay for items or when withdrawing money from ATMs in Japan.

Withdrawing cash from ATMs is still common in Japan because its cash-based society is part of its culture. There are many places that only accept cash, such as small shops. In city centres, more cards should be accepted as well as other cashless payment options. 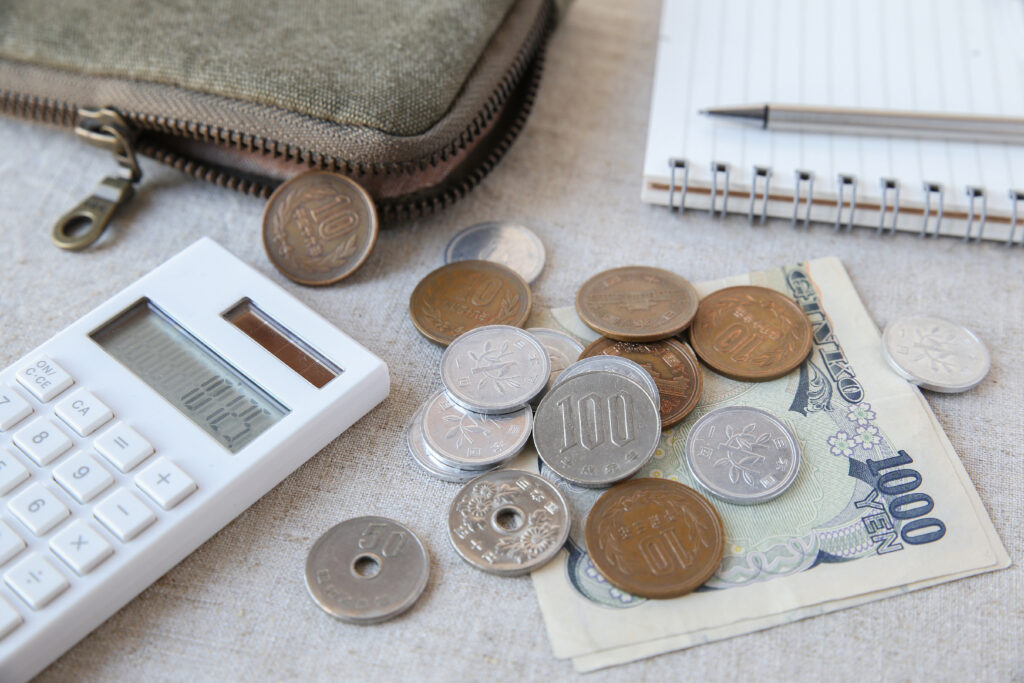 Choosing accommodation for a holiday in Japan

A holiday in Japan allows you to stay in western or Japanese-style accommodation.

If you are looking for an authentic experience in Japan you can stay in a Ryokan.

In general, Ryokans are designed with simplistic beauty in mind, often featuring tatami mats, shoji screens, paper lanterns and other traditional elements. Many also feature onsen hot springs or natural baths nearby for guests to enjoy. Some may even serve kaiseki ryori meals, which are high quality dishes prepared using seasonal ingredients. Upon arriving at a Ryokan, visitors will normally be greeted by the staff wearing kimonos who will help them check-in.

As mentioned, ryokans can be found in hot spring resorts. Here, you can relax your body in an onsen (Japanese, natural hot spring) post-flight. Bear in mind that some onsen will not accept customers with tattoos. We’ll cover tattoos in some more detail below.

In contrast, capsule hotels (or pod hotels as they are known in the UK) are a unique, budget-friendly option. Made up of tiny rooms, they’re a simple solution if you need to source accommodation quickly to rest. The popularity of capsule hotels can be attributed to their affordability and relative comfort compared to more traditional forms of lodging. Plus, they are often conveniently located near popular tourist destinations such as shopping districts, train stations and airports – making them an ideal option for travelers on a budget who need a place to stay without compromising on location.

Whether you’re travelling solo or not, when navigating to a capsule hotel via Japan’s railway network a JR Pass is recommended. It allows fairly comprehensive train travel all over Japan – including the world famous bullet trains! So with that freedom to explore, there are some customs that it pays to be aware of.

Japanese customs to follow during a holiday in Japan

Japan is known for its attention to etiquette. So, here are a few things it is good to know…

Try to give up your seat for someone if they require it more than you, such as elderly people, or pregnant women. Pregnant Japanese women often carry their unborn child discreetly. Instead, they wear pink maternity badges to signify their entitlement to a free seat. So, keep an eye out for these badges.

Also, across public transport, there are still precautions in place due to Coronavirus. Although 80%+ of the population are fully vaccinated, wearing masks on trains and buses is a common site.

Eating and Drinking in public

Food and drink are not permitted on public transport. However, when using the Shinkansen bullet trains or during long train rides, green carriages are reserved for seating where you can eat and drink. In these carriages, you’ll find tables and cup holders.

When you leave the bullet train, remember that eating and drinking while walking around is typically frowned upon. Instead, it’s more polite to follow Japanese etiquette and eat by a vending machine, stall, or outside the store where you purchased the item. If you’re observant you’ll notice the locals walking by with their takeout bags en route to eat somewhere later. 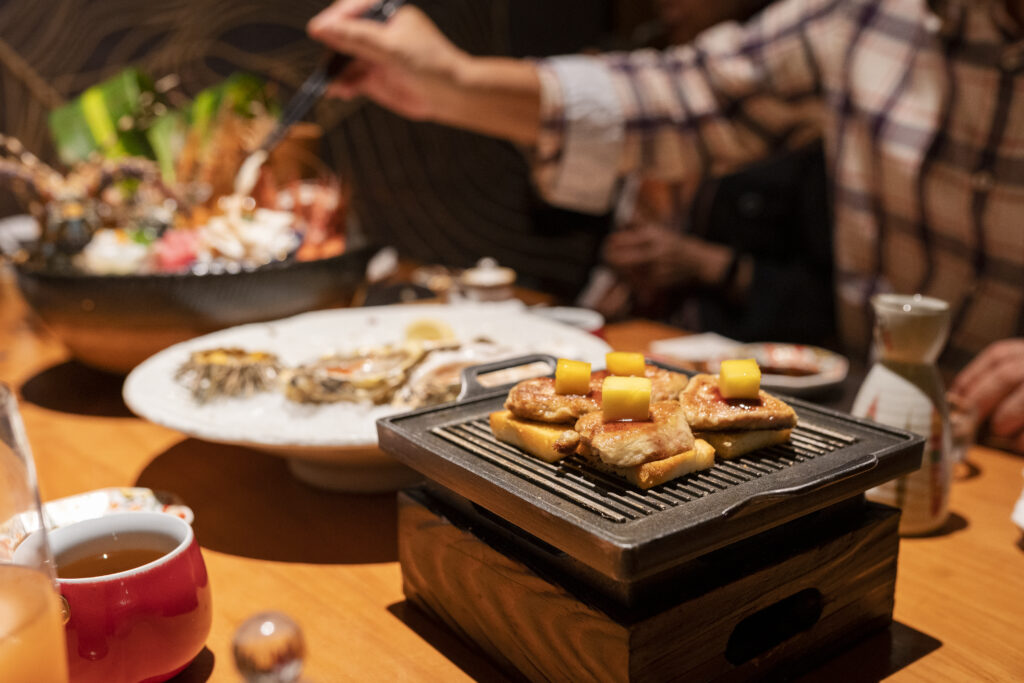 When eating in restaurants, be aware that tipping is almost non-existent in Japanese culture. In fact, it’s rude. Therefore, when you’re in a restaurant, bar or hotel don’t feel obliged to do so. There are other ways to be respectful throughout your stay…

Being loud or boisterous is disrespectful in Japan. It’s also considered bad manners to talk on mobile phones while on public transport. So, always remember to switch your phone to silent when travelling around, or just send a text message. During a holiday in Japan, you may notice that the Japanese speak quietly to one another when in public. For best practice do the same. 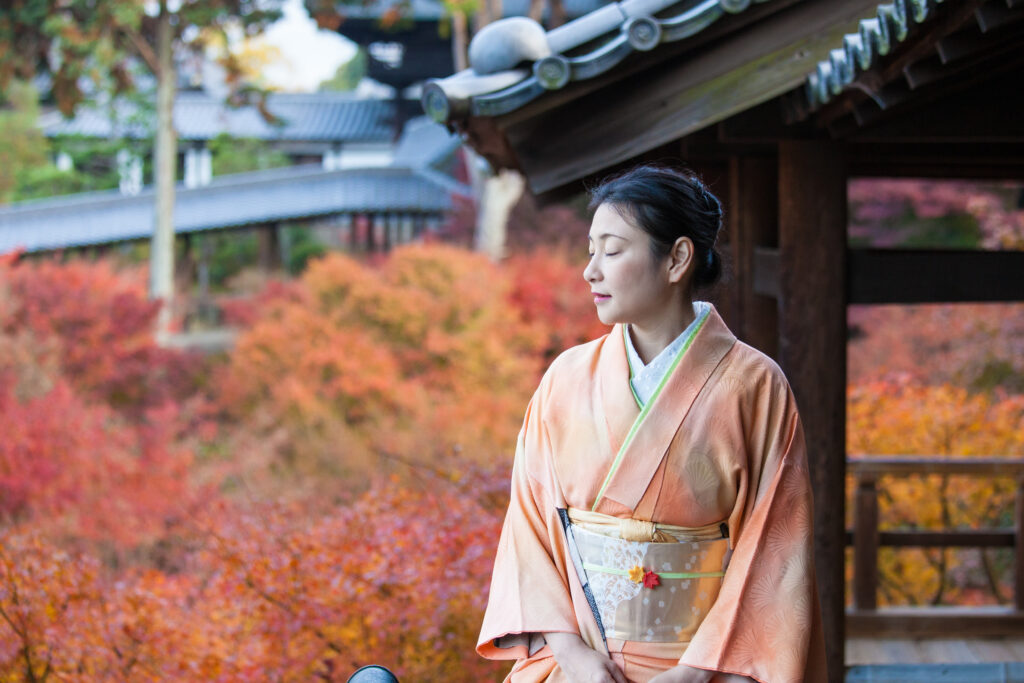 Tattoos in Japan were traditionally a sign of yakuza membership, signifying a link to an organised -and feared- crime group. Although tattoos are common in the western world, in Japanese society, there’s still some prejudice against them. As a foreign tourist, there will be less expectation to conform to this, so don’t worry too much.

Just be aware that your body art may attract some negative attention. Due to Japan’s rules, you may be required to cover your tattoos when in public pools or baths. Some places will be stricter than others. There are also tattoo-friendly onsen and hotels so you can experience this without feeling too self-conscious.

Following Japanese customs can be a little overwhelming but the Japanese (although shy) are warm and welcoming people. As tourists, we’re not expected to be aware of every unspoken rule. Hopefully, the pointers above have reassured you. Just remember, you’re there to visit a fascinating country and to experience its culture.

Any errors you make will be forgiven. So, relax and enjoy while visiting one of these Japanese holiday destinations…

Tokyo may have plenty of Metropolitan landmarks and sights to see, such as one of the world’s tallest towers – the Tokyo sky tree. Yet its many gardens and green spaces are great to relax in too. To learn about Tokyo’s past, the district of Asakusa is the area to head to.

When visiting Asakusa, visitors will find an array of ancient structures intermixed with modern buildings that give it an old-meets-new vibe. Here you can wander through narrow streets lined with traditional stores and eateries such as the Kaminarimon Gate, Asakusa Jinja Shrine, Nakamise shopping street, Hanayashiki amusement park and so much more.

The biggest attraction here is undoubtedly Senso-ji Temple – known as Tokyo’s oldest temple. Built in 645 AD and located right at the entrance of Asakusa – this Buddhist temple complex has been a spiritual centre for centuries. 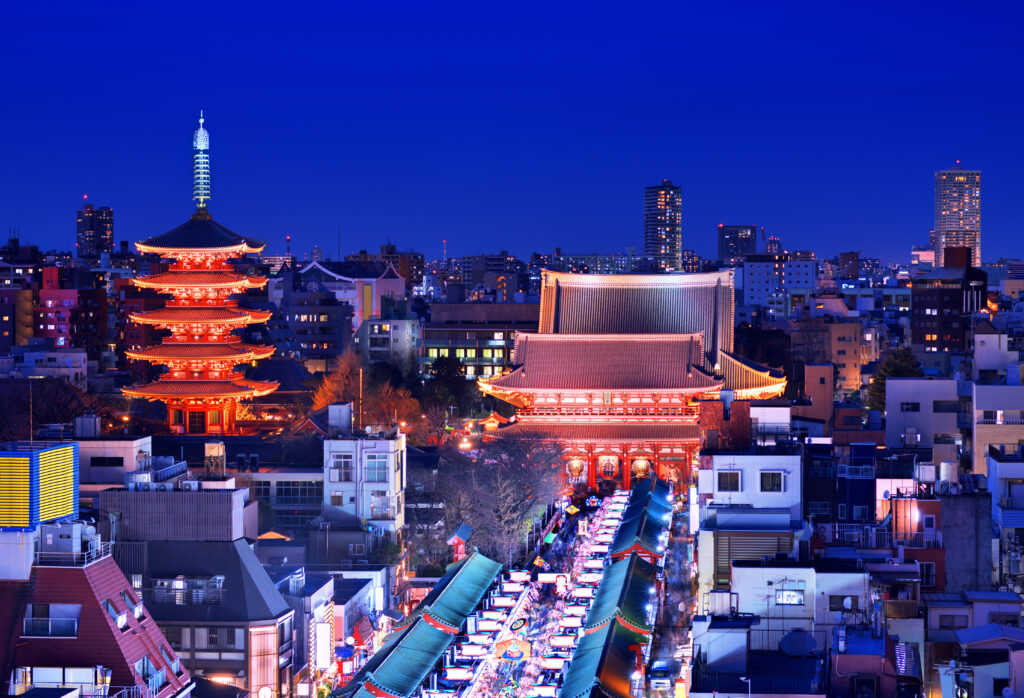 Kyoto was Japan’s original capital until 1868, with a rich history spanning over 1200 years. Many of the shrines, temples and other historical treasures remain for visitors to explore, making it arguable one of the worlds most fascinating cities. Some examples include Kiyomizudera Temple, known for its impressive wooden stage that stretches out over a valley; Fushimi Inari Shrine with its iconic orange torii gates; and Sanju-san-gen-do Temple which features breathtaking views of Kyoto from the top of its three-storey pagoda.

Kyoto is a beautiful place to visit in autumn from mid-September to early December. It’s a good time for reflection and ‘maple leaf hunting’. This is a traditional Japanese tradition and autumn festival called Momijigari. 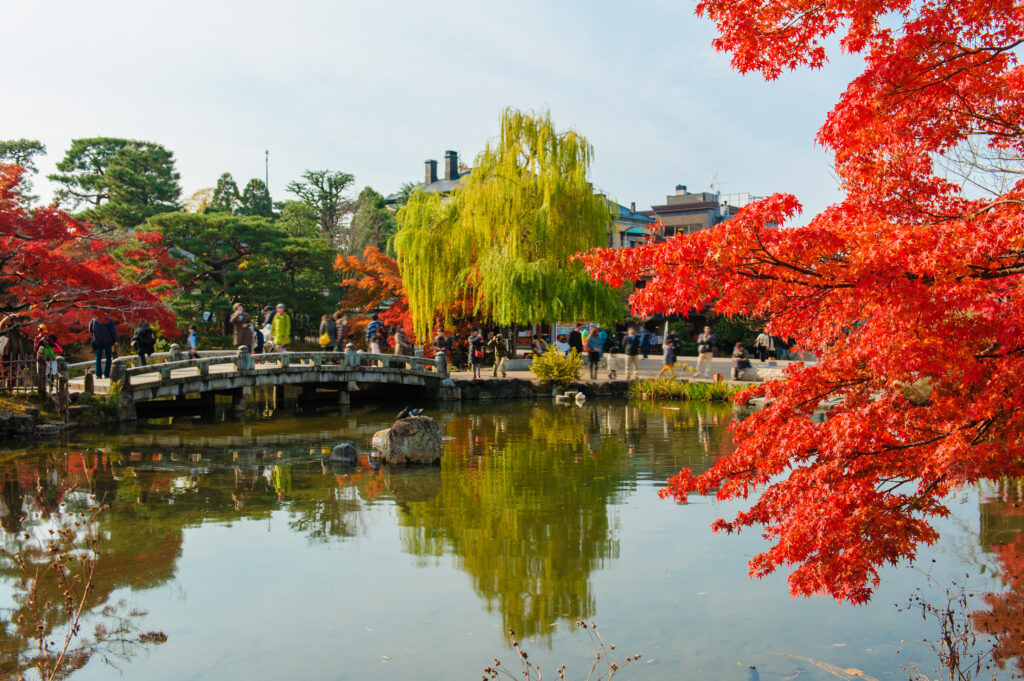 To see a castle from a fairy tale land Osaka Castle is worth a visit. It is one of the prime tourist attractions in Osaka as it provides insight into the city’s long history. Built in 1583, the castle was once used as a center of politics during the Edo period until 1868 when it was destroyed and later rebuilt in 1931. Visitors can climb up its eight stories for stunning panoramic views of the surrounding area.

This 14th-century castle is surrounded by gates, turrets, and smart stone walls. However, the best time to see it in all its splendour is April. In spring, Osaka castle’s park (Nishinomaru), is full of 600 beautiful, cherry trees. This makes it a top location for a picnic during hanami (cherry blossom viewing), another traditional Japanese custom.

To learn more about Japanese culture look out for theatres where you can watch Kabuki, a traditional Japanese dance and interactive performance. 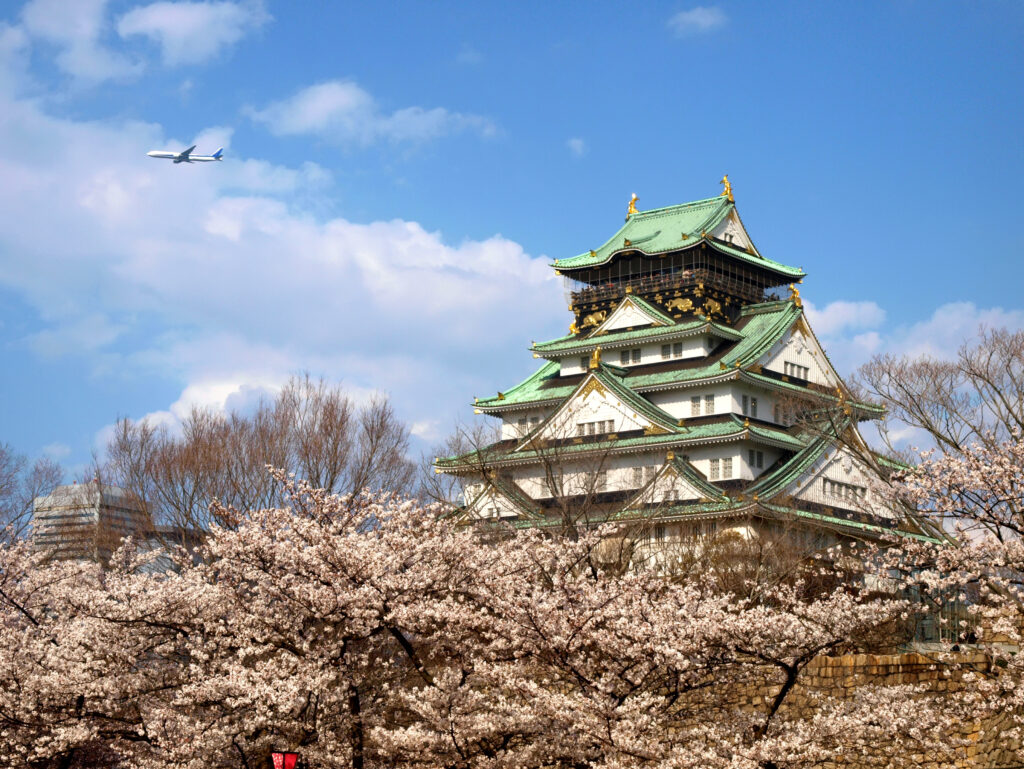 Take Free Spirit travel insurance for a holiday in Japan

Wherever you venture across the land of the rising sun, we hope we’ve provided you with enough information to travel with peace of mind. For more up-to-date information, when planning a holiday in Japan, subscribe to Gov.UK’s travel advice email here.